My Thoughts About Shadows

I am so glad you came back. I told you I was going to
paint my answer to the question,
"What does the shadow concept mean to you personally?"
First, darkness and shadow are not the same!
Darkness is the absence of light-Carlsbad Caverns.
Darkness does not force the light out but just the
opposite. Light dispels or forces the darkness out.
Shadows only exist where there is LIGHT and SUBSTANCE.
Invisible doesn't make a shadow. 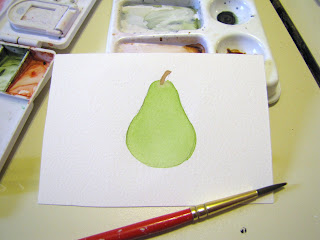 So here we go. I painted this sweet little pear.
Nice shape but flat as a pancake.
"The earth was void and without form, and darkness was over
the surface of the deep..." Gen. 1:2 (no presence of light) 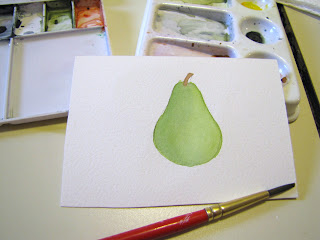 I added a soft little shadow on the left side of the pear.
As a artist, determining the light source or direction is
important to know where the shadow will fall.
"...and the Spirit of God was hovered (overshadowing)
over the waters." Gen1:2 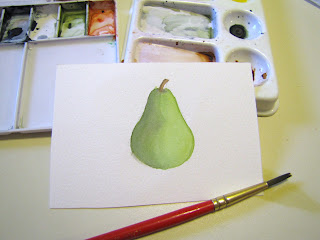 To increase the feeling of shape, more shadow was added.
Just a little note- I used purple (not black) for my shadow.
Purple is a royal color.
Ex 13:21 By day the LORD went ahead of them in a
pillar of cloud to guide them on their way.
He made a shade or shadow for them in the heat of the desert. 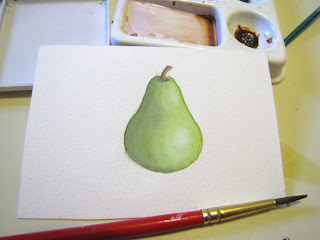 Shadow and light go together!!!
You can't have one without the other!
Just a little note.
Gen 1:3 "God said 'Let there be light' and there was light"
Then in verse 16 And God made two great lights;
the greater light to rule the day, and the lesser light to rule the night:
he made the stars also.
17And God set them in the firmament of the heaven to
give light upon the earth,
18And to rule over the day and over the night, and to divide the
light from the darkness: and God saw that it was good.
19And the evening and the morning were the fourth day.
Did you see it? Day one -He created the light
but it was several days later when He created the sun and moon.
He is the light!
I lifted a couple of light areas on the right side
or light side of the pear. But, notice in the picture above,
the pear is floating. What is needed to anchor it? 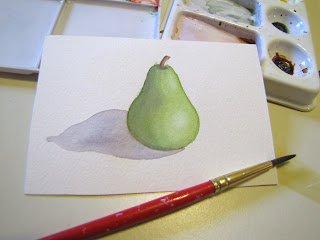 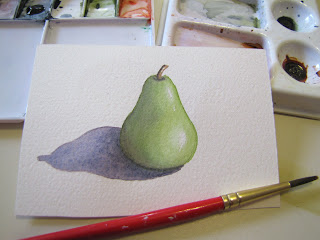 The last step - stronger shadow closer to the pear
and brighter light on the light side.

I have also thought about my children while contemplating
"shadow". When they were little, all 3 of my sons were
like my shadows. They were close and right by my feet.
They wanted to see what I was doing, help with what
I was doing, or maybe they just wanted to be where I was.
I want to be that way with my Heavenly Father.
I want to LIVE in HIS SHADOW!

My friend and fellow blogger Renee has
a great post about Psalm 91.
If you have a minute, check out "If Then".
Posted by Nathalie Kelley at 8:40 AM 3 comments:

I am so glad you stopped by!
On Wednesday we started a new study.
Psalm 91-God's Shield of Protection by
Peggy Joyce Ruth. 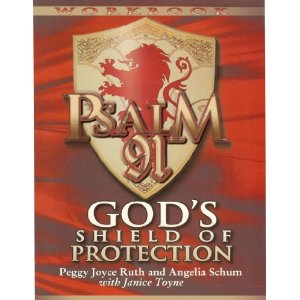 My friend, Melissa is going to be leading a group
of ladies ranging in ages 18 to 60.
60 years old - that would be me - the most vintage
lady in the group.
In the first week of homework, referencing
Psalm 91:1 and Acts 5:15, she asks the question,
"What does the shadow concept mean to you personally?"
Her answers
#1 Shadows can be good
#2 The concept of protection and healing
with a direct reference to shadow
#3 The shadow came and went
as Peter came and went
I think I am going to go paint my answer.
Hope you come back soon and see my answer.
He who dwells in the secret place of the Most High
Will abide under the shadow of the Almighty. Psalm 91:1

Posted by Nathalie Kelley at 8:52 AM No comments:

Come Away-Come Away With Me

My friend, Venson asked if I could paint his vision.
He was listening to "Come Away" by Jesus Culture
and could see Jesus sitting on the edge of a cliff-the highest
point in Colorado City. He could envision Jesus
extending his hands and asking the people
of that city to "Come away with me". 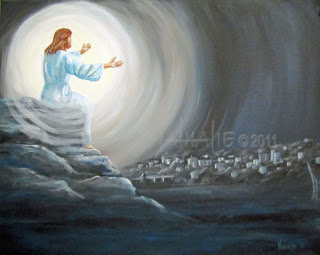 This city has had a lot of violence and tragedy. Last year
it was in the national news. Hailey Dunn went missing
and still has not been found. As I painted this, I could feel
His heart as He calls to His beloved creation.
There are buildings where there is no light at all, some
have dark windows and only 1 or 2 lights, and some
have lights that are shining brightly.
This is 16"x20" acrylic on gallery wrapped canvas.
"...declare the praises of Him who has called you out
of darkness into His wonderful light." 1 Peter 2:9
One of my FAVORITE scriptures!!!

Water Can and Pansies 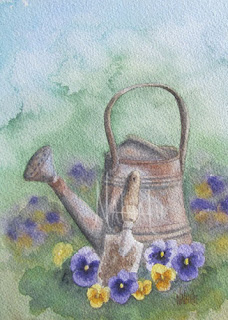 Water can, pansies, and a trowel. I still have spring
on my mind. This is another small work (5"x7").
We still need rain in the mean time
I can still dream.
Speaking of dreaming, I am going to be
participating in a Kim Klassen photoshop class.
It is called Beyond Layers, a year of artful inspiration.
I have enjoyed her tutorials, layers and textures.
Our first pre-assignment is to write down
our dreamiest dream. HMMM!
Posted by Nathalie Kelley at 9:30 PM No comments: 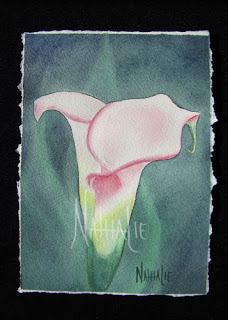 Yesterday I spent the afternoon transferring
photos from my hard drive to my external hard drive.
Then I put them in folders so I can find them easier.
I found a photo of 2 Pink Calla Lilies. These were
growing in our flower bed a couple of years ago.
Last year was too dry for the lilies.
But, it reminds me that spring will be here soon.
I know winter is not over yet but I was inspired
so I grabbed my palette and brushes this morning.
5X7 watercolor on Arches 140 lb. paper
On January 2, 2011 I painted a prayer,
"Send Your Rain" 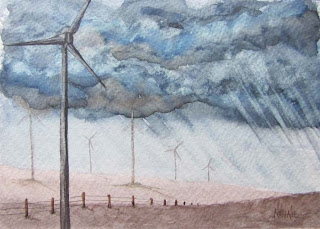 "Let us acknowledge the LORD;
let us press on to acknowledge him.
As surely as the sun rises, He will appear;
He will come to us like the winter rains,
like the spring rains that water the earth.”
Hosea 6:3
2 times Hosea says, "Acknowledge Him"!
That means - pay attention to what the prophet said.
Still need the rain! Still praying! Still pressing on!

Posted by Nathalie Kelley at 5:19 PM No comments: 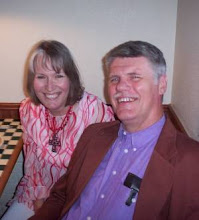 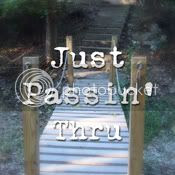